Fun fact: there were 213,089 Mercedes SL-Class R129 produced. Here’s another: you can still buy one for under £10,000. And, with such a design pedigree, reliable engineering and enviable looks – it is a car destined to only rocket in price. So get in gear early, and invest now.

But why invest we hear you ask?

When the R129 was first introduced in 1989, it pulled Mercedes-Benz’s styling into a new era. And, even though it rolled off the production line with just one year of the Eighties to go, it has come to typify this period, of angles and slick but brash styling. As such, the R129 remains one of the most striking cars Mercedes has ever built – and this iconic status deserves it a place in your investment portfolio.

Bruno Sacco, who served as the head of styling at Daimler-Benz for the last quarter of the 20th Century – and the man behind the reinvention of the SL Class – is widely regarded as one of the greatest automotive designers in history, so the car has a weight and respect behind it only afforded to a handful of roadsters. But that wasn’t the only perk to the sports car.

A six-cylinder 300 has either 190 bhp or 231 bhp in its 24-valve twin-cam form, whilst the 500 packed a 32-valve 326 bhp V8 under the bonnet. As such, not one R129 was low on performance stats, and when the later five-speed auto was introduced, this upped the technology even more. Making this the first SL the first great all-round investment.

And it wasn’t just the engine that impressed – this was the first SL to make use of every electrical gizmo and gadget you could pack into a roadster. The roof was power-operated, the earlier models featured dual-range four-speed automatic gearboxes and some select SLs even had suspension that automatically lowered itself at speed. Even safety was upped electronically – a pop-up roll bar installed, airbags upped and traction and stability systems introduced. 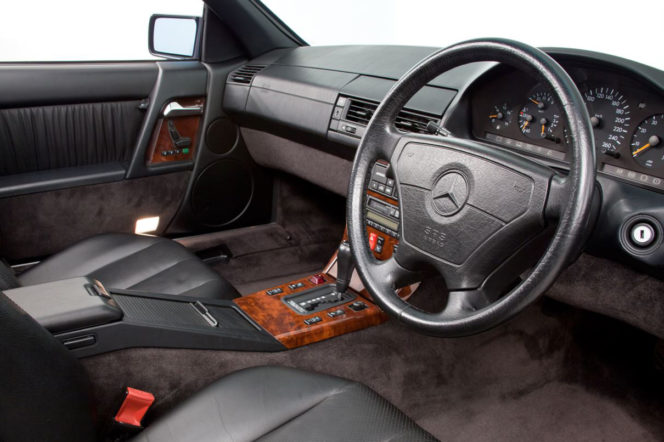 But like all investments you have to be careful, there are several slight faults or downsides with the R129 that could be a real factor if you buy a bad example. The separate hard-top, for instance, was a source of serious anxiety for several buyers, so make sure yours fixes and detaches well before buying, and is in good shape. Similarly, there were some slight handling issues with a number of the R129s, so take your potential investment for a spin before committing.

Go on, off you go..carandclassic.co.uk