And it’s not only his titles that define him as a prize fighter, but also the nature of his victories. Joshua laughed off an in-ring riot to flatten old amateur rival Dillian Whyte with a crushing right uppercut in 2015, and he got off the canvas to knock out former long-reigning heavyweight champion Wladimir Klitschko in April.

Most recently, his nose was almost split open when Carlos Takam headbutted him last month. Joshua shook off the injury to score a dominant stoppage win and preserve his impeccable knockout winning run.

Needless to say, Joshua is a renowned entity in the world of sports.

What you might not know as well is Anthony Joshua “the brand.

Cunningham, who is in his late 20s, has one clear vision — to take Joshua’s wild popularity in Britain around the world. This involves fights, free marketing, and short-term commercial deals that will continue to boost Joshua’s net worth.

When we met Cunningham by the AJ Boxing and Commercial offices in Battersea, he shared details on the revenue streams — such as deals with blue-chip giants like Under Armour — that keep Joshua in the money when he takes a break from knocking opponents unconscious.

Sponsors are the only marketing Joshua needs

Joshua’s fight contracts are attaining heavyweight status. For the Wladimir Klitschko bout in April, Joshua earned over £10 million — a figure that rose when pay-per-view buy-rates were calculated. He received a similar amount for dueling Takam in October. However, he supplements his income with sponsorship arrangements.

There’s no marketing department at AJ Boxing and Commercial because the sponsors effectively act as one. YouTube commercials with Lynx and Westfield adverts on buses ensure the fighter is seen by different demographics, according to Cunningham, who said that during fight weeks, he gets text messages from colleagues and friends saying that they can’t “not see” Joshua’s face.

“With these commercial partners it is hugely important how they activate us,” Cunningham said. “They are our marketing department. Lucozade, Lynx, they’re putting it out there. And Lynx especially is a younger audience. We’re widening the demographic. Anthony was GQ Man of the Year, that’s another demographic. Fashion. That’s our marketing.”

Cunningham said that despite having “a lot of money,” Joshua “doesn’t live the life that he could.”

“From the outside, it probably looks like he does. He’s seen in private jets, wearing expensive watches, and driving around in nice cars.

“The jets are all sponsored. We’ve never paid for a private jet, or a helicopter, in our life. He gets a signature car from Land Rover.

“He’s not spending that money. He’s accumulating money. He’s living a lifestyle that probably everyone wants him to live, or see him live, but he’s doing it in a smart way. Tactful.”

He added that until recently, Joshua was still living with his mum, although he just bought a property in North London that he’s renovating.

He has a hands-on role in his deals

When Joshua’s not fighting, he often takes on “sponsorship activation” days which typically last six hours. Cunningham said Joshua has a hands-on role — if there’s a product involved, like an Audemars Piguet watch or a Jaguar car, he looks at the product and suggests how it could be developed.

“Anthony gives his opinion,” he said. “He has his input.”

However, he said the days are mostly made up of “content capture” in the form of images, film, “social media stuff,”‘ and sometimes a Q&A. 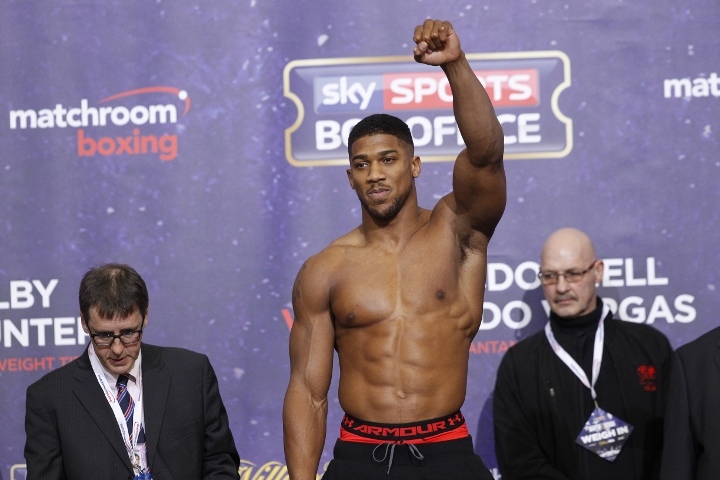 Considering the knockout salary he receives from fighting and the numerous sponsorship deals he has, it’s perhaps no surprise that Joshua, already a multi-millionaire, wants to make a billion.

Cunningham said that making that so is a team effort between himself and Matchroom Sports promoters Eddie Hearn and Frank Smith, the two key figures who determine Joshua’s opponents and arrange his “purse” — the fee he receives for each fight, regardless of whether he wins or loses.

“Joshua has got aspirations,” Cunningham said. “And he wants to do it. He wants to be a billionaire and why not. Conor McGregor and Floyd Mayweather showed what can be achieved. You have to have the right ingredients.

“Everyone forgets how early we are. We’re only three years in but already doing the biggest deals in Britain at the moment. He’s the most commercially active athlete there is in the UK definitely, and we’ve got global partnerships.”

“If you chart where Anthony is and the income he’s developing through fights and sponsorship in these three years against Mayweather in his first three years — it would be incomparable. Mayweather may have only been earning fifty grand back then.”

So could Joshua out-earn Mayweather?

“Anthony could peak and tail off. You never know. But look, we don’t have meetings and say, ‘Right, billionaire boxer, how do we achieve this?’ We have a strong belief in enjoying what we do. Any commercial partner, we want to enjoy that relationship. It’s about working with the right people and enjoying the partnership. That’s a big mantra for us.”

He also earns big outside of sport

Joshua also has a share in BXR Gyms, which Cunningham called a “side project.”

“He has a merchandise line that we run for him from the office and it does amazing numbers,” he added. “We’re growing it very specifically and he’s very hands-on with it. He’ll look at every tshirt and make sure he’s happy with the design. As Mayweather’s clothing line ‘The Money Team’ demonstrates, there’s potential in it.”

As Joshua boxes less — five to ten years from now — he will focus more on his management firm, which currently has two former Olympic stand-outs in bronze medalist Joshua Buatsi and unbeaten cruiserweight prospect Lawrence Okolie.

“When Anthony is fighting less, we want long-term commercial partners and a number of businesses, including his management company,” Cunningham said.

“We are not necessarily going to sign a load of boxers, but let’s see how we go with these two guys… work with them. This allows us to get a model that works, ensure they are successful, then in the future we can maybe grow it more.”

He added: “We want to be an early mover with everything. It may not be the right time but if we do it now, we help set up for the future.”

The AJ brand is going global — and America is the focus

Joshua has fought two stadium fights this year — against Klitschko in April and Takam in October — selling 160,000 tickets in total. These are numbers that even England’s national football team struggles to hit.

It seems like his future is bright — but what do his team have in store?

“Planning is really hard in boxing,” Cunningham said. “But we have a plan of where we want to be as a business as these are the things we can control.

“In the next year we want to double our commercial revenue. It’s something we have done this year. Now he is on World Championship level we could double again.”

Along with Joshua focusing more on his management business, when Joshua moves into the second and latter thirds of his prizefighting career, Cunningham will start to secure longer-term commercial deals, rather than the one-to-three year commitments they currently have now.

He said the company will “condense our partnerships to six to eight blue-chips, big long-term companies, with good activation, who will help us globally when we go to different territories.”

According to Cunningham, boxing “is not bubbling” in America as it is in Britain, yet it remains a key market.

But America is not the only territory that interests Cunningham. “There are four territories… America, Dubai, Nigeria, and Asia.” This is where Joshua, the brand, will be heading in the near future.

“There’s also global interest in Dubai,” Cunningham said. “We have a partnership with Dubai Tourism and they really like him and get his philosophy on life, his morals, everything. He resonates with that territory. They want to bring boxing there. Hopefully we can do something there.”

Macau, Las Vegas, and New York are also prime fight cities. Despite the potential for new deals around the world, for Cunningham, it’s the existing global partners who will assist in getting Joshua’s story out there.

“Most of our partners are global… Under Armour, Beats, StubHub, all huge, maybe even bigger in America. So when we go over there we piggy-back with them. That’s an important part of it. When we go to America we will use them to tell his story.”

Joshua “the brand” is already a heavy hitter — but Cunningham clearly has a plan to make its punch even more powerful.