Mr.porter took a look at The co-founder of Airbnb’s home and shares his local hotspots.

It’s more bachelor pad than billionaire’s palace, but Mr Joe Gebbia’s characterful home in San Francisco is an accurate reflection of who he is and the company he started.

Airbnb was launched in 2007 from the small apartment nearby that Mr Gebbia shared with his best friend and co-founder Mr Brian Chesky soon after they graduated from the prestigious Rhode Island School of Design (RISD). When their landlord suddenly ratcheted up the rent, the pair opportunistically advertised three airbed mattresses and breakfast for guests visiting San Francisco for an upcoming design conference. The idea gained traction and their third co-founder, Mr Nathan Blecharczyk, joined shortly afterwards.

A decade on, Airbnb is now a $31bn behemoth with more than four million listings in 65,000 cities across 191 countries – becoming, as Fast Company magazine put it, “the world’s largest hotel chain, without owning a single hotel”. As the poster child of the sharing economy, the company has completely normalised the idea of inviting people you’ve never met to stay in your home, building mutually policed trust where before there was inherent stranger-danger caution: a remarkable and rapid cultural paradigm shift.

Mr Gebbia, 36, now lives on his own with his rescue dog, Belo, in a cool and quirky loft conversion. An industrial designer and Airbnb’s chief product officer, he describes his apartment as “a big room of creative references”, from the art on the walls by celebrated local artist (and now friend) Ms Heather Day, to the pieces of iconic mid-century design furniture by Mr Gerrit Rietveld and Mr Charles and Ms Ray Eames, to the reverential museum-like display of his collection of rare Nikes, Reebok Pumps and adidas Yeezys. 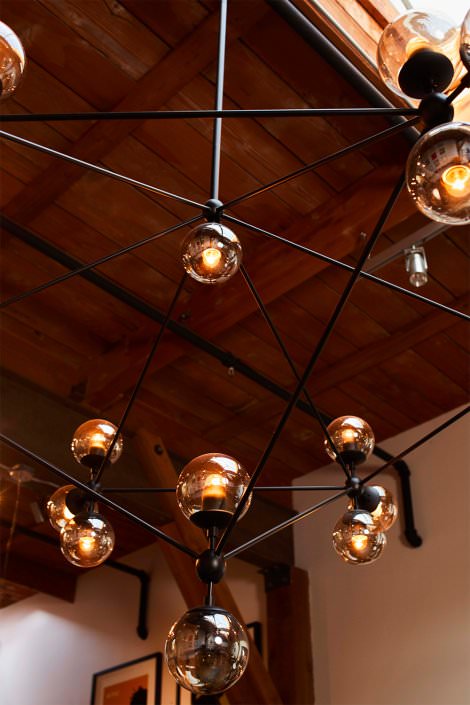 “My wardrobe is probably 85 percent black or dark colours, so my sneakers have become a source of expression,” he says. “I love to bring a sense of style to the office. We care a lot about design at Airbnb – design has been the differentiator for us which has helped to elevate us above other tech companies. Showing up for work in clothing that reflects good design is another reflection of our service.”

The three founders, each currently estimated by Forbes to be worth $3.8bn, are leading by example. In 2016, they all signed up to the Giving Pledge, a select group of billionaires who have committed to give the majority of their wealth away.

Even more practically, Mr Gebbia has listed his own spare bedroom on a new Airbnb initiative he is spearheading called Open Homes, which leverages the company’s technology and their hosts’ generosity to find emergency accommodation for those forcibly displaced by a natural or political disaster. He hasn’t had a guest to stay yet, though.

“Over the past five years, our hosts have helped people in 90 different disasters from tsunamis in Japan, to wildfires in Napa, to hurricanes in Puerto Rico, and earthquakes in Mexico City,” he says. In the last year, partly as a reaction against President Donald Trump’s hardline stance on refugees, Airbnb has been working with the International Rescue Committee to house asylum seekers around the world. “We have become experts in short-term hospitality, creating trust between strangers, delivered through scalable software, and now through Open Homes, we happen to be building the world’s largest humanitarian housing platform.”

But for the vast majority of Airbnb’s users, the company has revolutionised the way many of us travel and experience new places. Mr Gebbia himself is away two weeks a month, staying in Airbnbs and meeting hosts all over the world, which helps him refine the service.

“Tourism has become a bit like fast food, it’s about speed and efficiency,” he says. “To me, Airbnb represents the opposite of that. It’s about putting the soul back into travel, it’s about discovery. Our hosts give their guests access to local neighbourhoods, local shops, local stores. It’s this idea of transitioning from feeling like an outsider to feeling like an insider.” To wit, Mr Gebbia takes us on this personalised tour of the places he visits on a typical day in San Francisco. 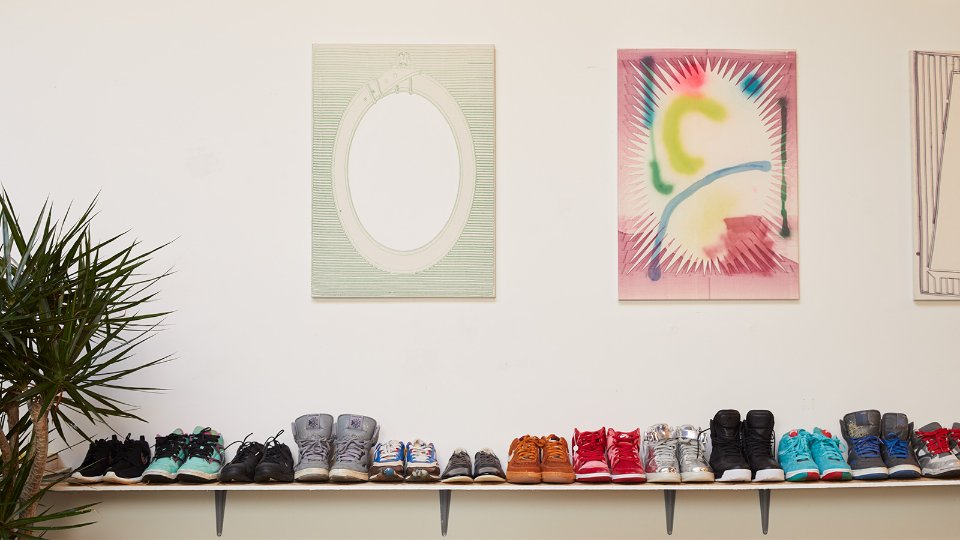 Breakfast: Just For You Cafe

“I wake at 5.40am and work out from 6.00am to 7.00am each morning, either power lifting or jujitsu. When I get home I aim to do a 10-minute silent meditation. It starts with a breathing exercise that leads into reflecting on things you’re grateful for and then into thinking about the things that you want to create in your life and your future. It’s a very visually based meditation and it leaves me in a peak state afterwards, and so I feel like I’m ready to take on the day. I normally pick up breakfast at the Airbnb offices – we put on great food for all staff – but Just For You Cafe is a go-to for weekend brunch. You’ve got to have The Cowboy, which is French toast with eggs and either bacon or sausage. They’re also famous for their beignets, which are like puffed doughnuts made fresh to order. This place is in the Dogpatch – a very cool neighbourhood in central San Francisco full of great food, little boutiques and art galleries. I’m really into art and I collect the work of a local artist, Heather Day, who has her studio nearby.” 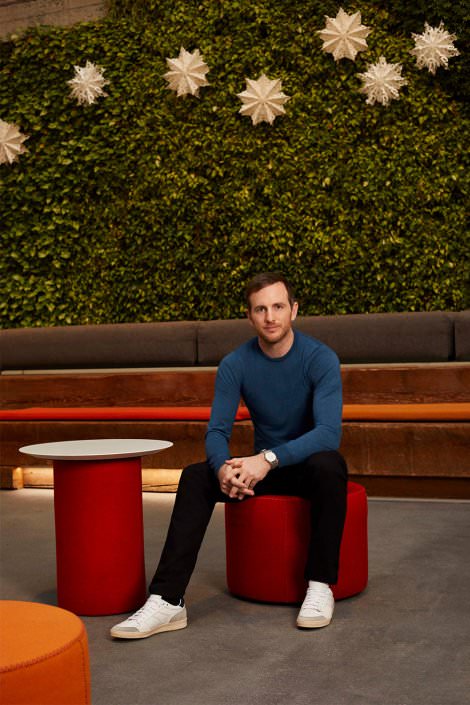 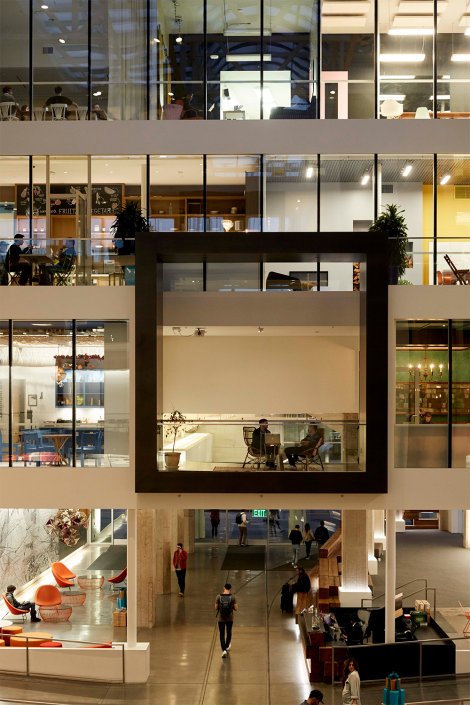 “I walk to work, arriving around 9.00am. Airbnb is an urban concept, so it’s important for us to be in the heart of the city rather than in, say, a gated office park in Silicon Valley. It’s the antithesis of our company culture to be closed off. We’ve created an office environment that encourages our team to move around and interact. Each of the spaces here – the meeting rooms, the breakout areas – is a recreation of one of our Airbnb listings, from Amsterdam to Brooklyn to Tokyo, so it doesn’t feel like some generic tech company. When you walk into the atrium of this iconic 100-year-old warehouse building in SoMa, you can look around and see a cross-section of the homes featured on our site, and you know immediately, without seeing any signs or logos, that this is Airbnb.”

To read the rest head over to Mr.Porter.com